David Plaister Ltd were very proud to be part of the auction at The Axentis Michael Memorial Ball raising an incredible amount of money for local charities in Weston-super-Mare. 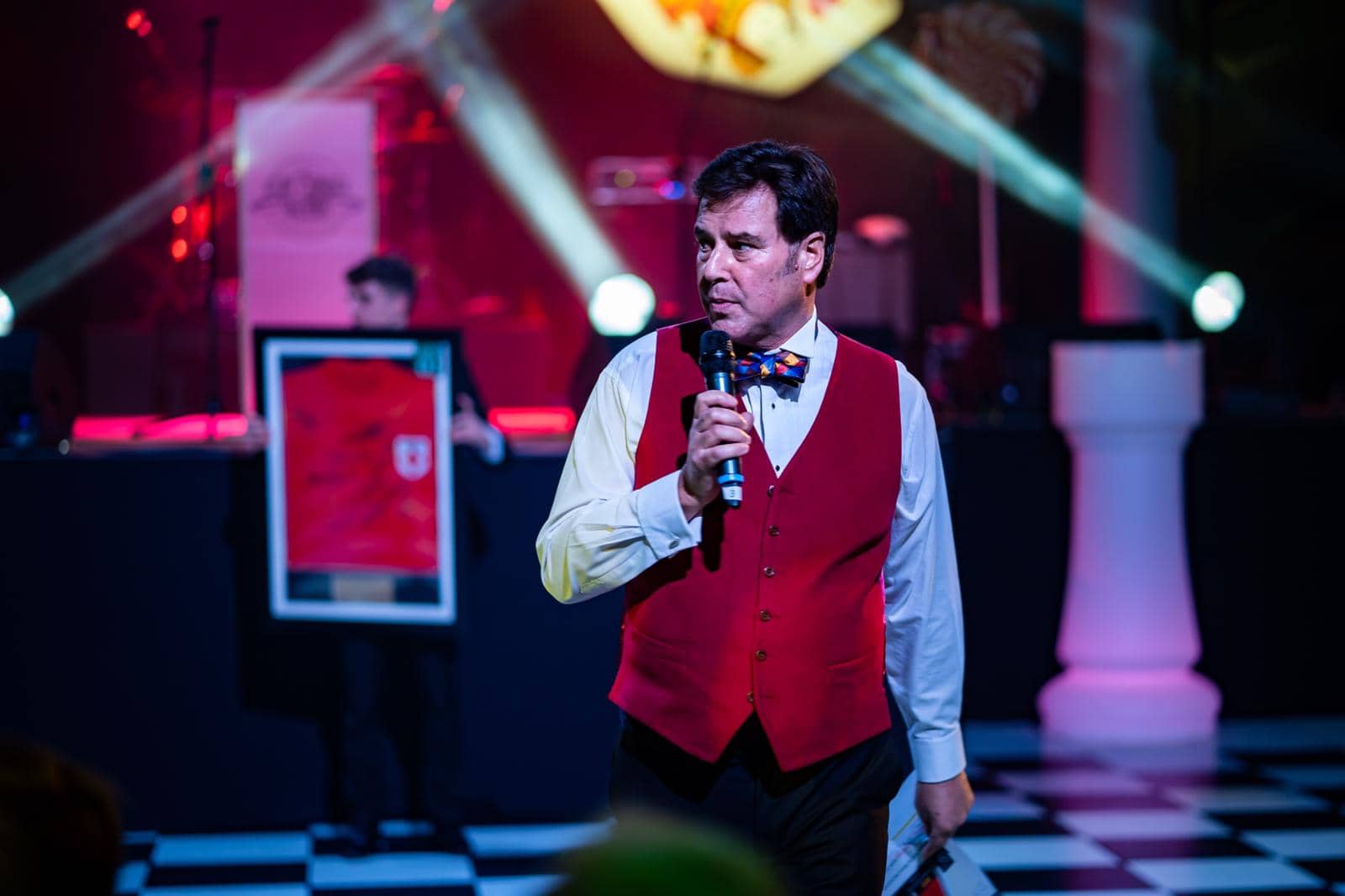 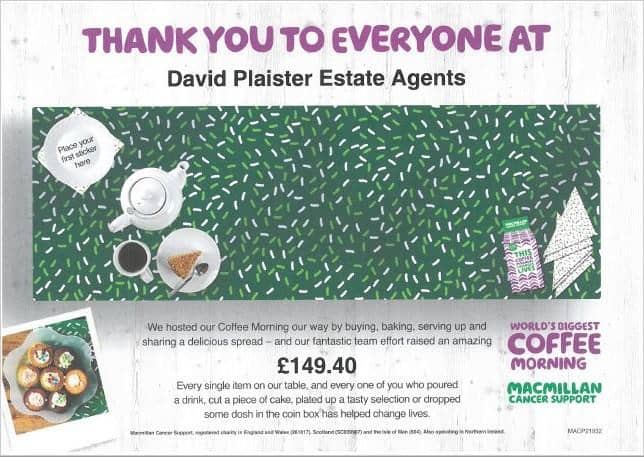 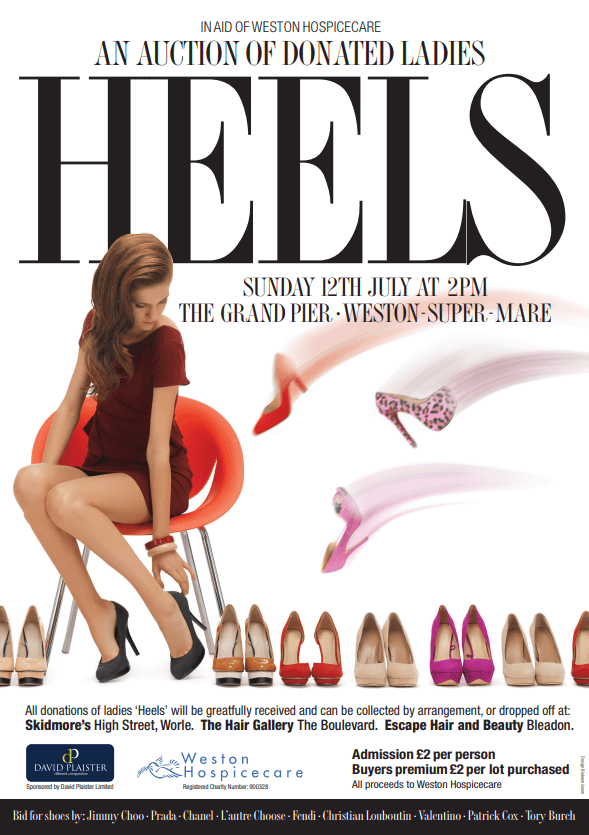 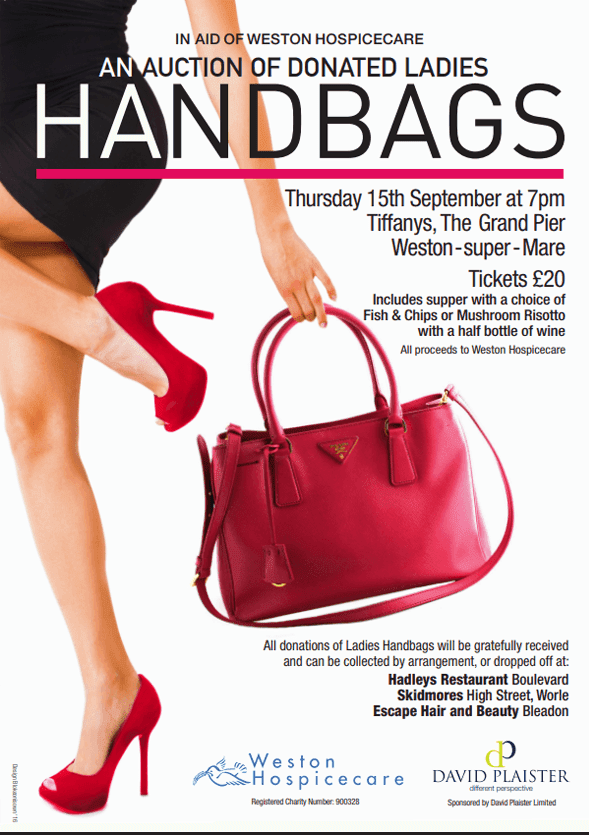 On behalf of Uphill Village Society and Uphill Community School PTFA I would like to thank you for placing an advert in the fete programme and for sponsoring a gazebo at our village fete this year.

I am pleased to say that we managed to raise just over £4,600, which will be used for the benefit of the children in the school and the upkeep of the village through the work of the Village Society.

The housing market is moving and so are Team Plaister….

We are putting our ‘best foot forward’ and taking part in the Weston Super Half in March 2018. Our dedicated team are preparing themselves for the 13.1mile run taking in some of Weston’s best scenery, to raise money for Weston Hospicecare. Any and all sponsors/donations would be greatly appreciated to help raise money for this fantastic, local cause. 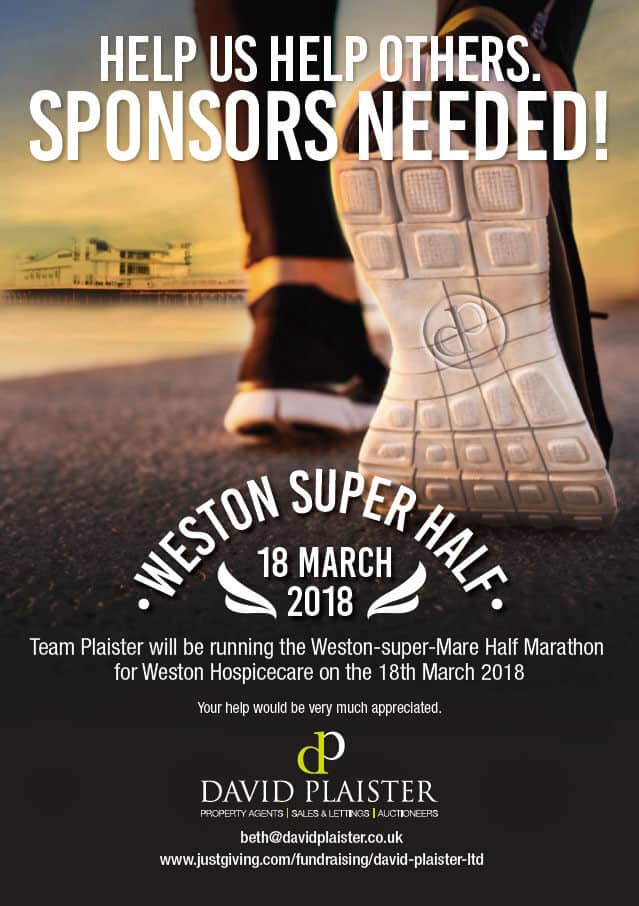 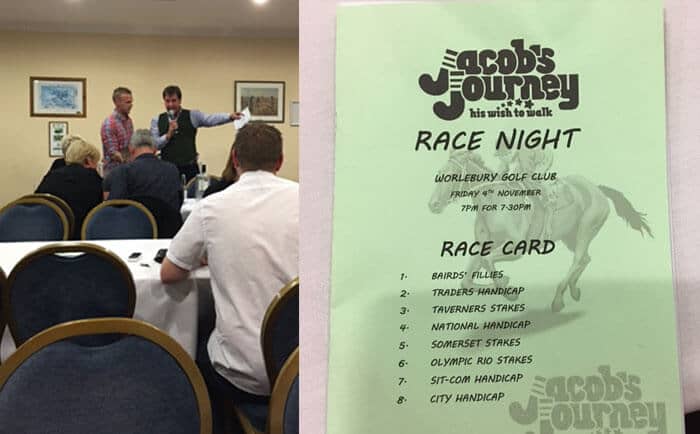 The team at David Plaister Ltd were proud to support The Baird family in their very last fund-raiser.

David worked the room again auctioning the race horses which proved to be great fun.

The evening raised the remaining funds required which were added to the fantastic amount of money already raised, helping the Baird family in their moment of need.

David Plaister Ltd have again risen to the challenge and raised an amazing amount of money for Weston Hospice Care.

Following on from the successful ‘Heels’ auction The David Plaister team worked tirelessly collecting designer handbags from all sorts of locations.

Donations were received from ladies such as Deborah Meaden, Lorraine Kelly, The Three Degrees, Sally Sanders and many, many, more.

This time the event was organised as a wine and supper evening at the fantastic Tiffany’s restaurant located at the end of Weston’s iconic Grand Pier.

The cuisine was just perfect and everyone enjoy a fun evening raising money for such a worthy cause.

David commented “Once again the wonderful people of Weston and the surrounding areas have ‘dug deep’ and supported us in raising an amazing amount of money for this local charity. I would like to say thank you to each and every one of them for their attendance, donations and assistance which is greatly appreciated. 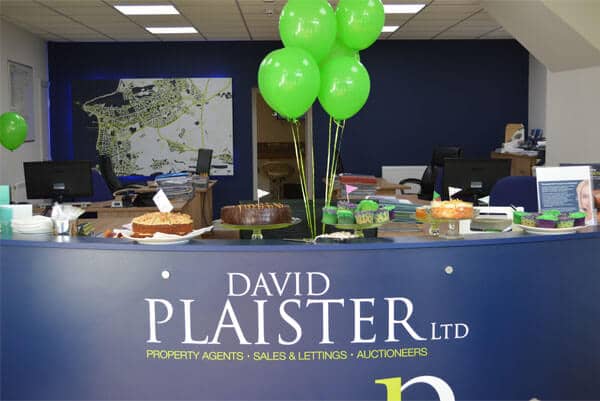 ‘Exceedingly’ Good cakes were on offer at David Plaister’s office…

£200.38 was raised when David Plaister Ltd hosted their version of Macmillan’s coffee morning in aid of the Cancer Charity.

A vast array of wonderful cakes were produced by family, friends, staff and clients which resulted in a busy morning of chatting and sampling the delights on offer!! 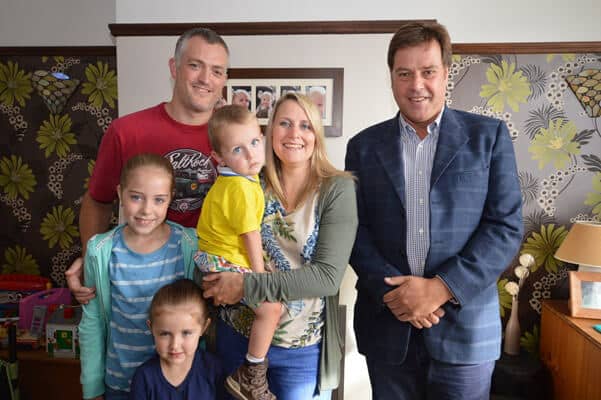 The team at David Plaister Ltd were proud to support The Baird family in their quest to raise £75,000.00 pounds so that Jacob could receive ground breaking treatment in America.

The David Plaister team worked tirelessly in order to ensure that the ‘Jacobs Journey’ Ball was a complete success, David once again acted as MC and delivered a very successful auction.

The evening raised £18,640.00 which was a fantastic amount of money helping the Baird family in their moment of need. 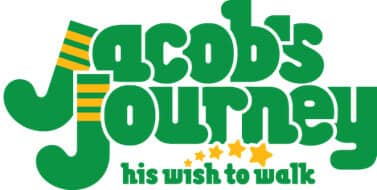 In The Local Community 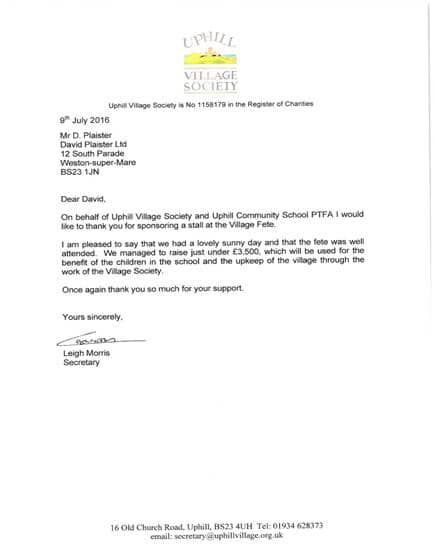 The beginning of July saw the start of some of the many Summer events in the surrounding area, always happy to support local events, David Plaister Ltd recently sponsored a stall at the annual Village Society’s Summer Fete which helped raise £3,500 towards the local school and village upkeep.

“Dear Liz (if I may) We have been informed by the solicitor dealing with the deceased estate which included 45 Cliff Road that the auction sale was very successful and achieved a price of £308,000.

I just wanted to contact you and your team directly to sincerely thank you and your colleagues for all the work that went into placing the property into the auction on Tuesday 26 July, all the marketing involved and the invaluable advice we received on the numerous offers received before the auction. I hear the auctioneer worked extremely hard during the auction to finally reach this extraordinary price, please pass our thanks on for this, we really are most grateful.

The extra funds this sale has generated will go a very long way in our daily work improving the lives of our service personnel who have received life altering injuries while selflessly serving their Country so we can’t thank you and your team enough. Very best wishes 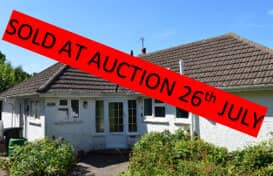 Our very successful July Property Auction saw the sale of a delightful bungalow with stunning coastal views near Worlebury. Donated to charity by the previous owners, the proceeds from the sale went to Help for Heroes. A charity dedicated to providing direct, practical support for British servicemen and women who have been wounded or injured in the line of duty. David Plaister Ltd recently received this wonderful email from the charity following the auction. 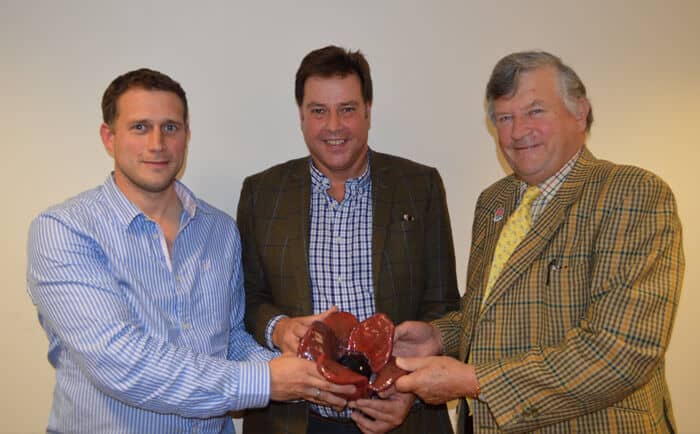 The popular Puxton Park tourist attraction commissioned Bristol Blue Glass in Bath Road, to create a free blown glass poppy earlier this year to commemorate Armistice Day. A silent auction was held to raise funds for The Royal British Legion and the poppy was sold for an undisclosed sum to David Plaister Limited.

Poppies became synonymous with the great loss of life in war after flowering in the war-torn battlefields of Europe at the end of the hostilities in the spring of 1915 and this wonderful commemorative poppy will now be a lasting reminder of those who fought and died during the conflict and will be displayed in the David Plaister Ltd Office, 12 South Parade, Weston super Mare. 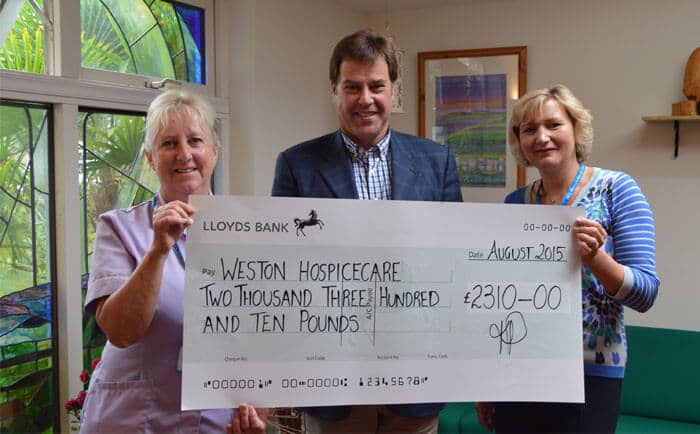 Weston-Super-Mare, Somerset – SHOES donated by James Bond Actress, Jane Seymour, and hundreds of women across the region, have raised more than £2,000 for charity.

The glamourous Bond star flew over a pair of signed shoes, which she wore at the Los Angeles Grammys, to take centre stage at The Grand Pier Ladies Auction of Heels event.

Together with her Grammy pass and two signed books, the items fetched over £200.

Coveted labels such as Christian Louboutin, Chanel, Jimmy Choo, and Prada, plus many high street shoes were also auctioned, raising £2310 for Weston Hospicecare.

Event organisers, David Plaister estate agents, say the auction was a huge success and they are now planning a handbag event.

Mr Plaister said: “This was the first of our fundraisers and we were delighted with the support shown. “We literally had hundreds of pairs of previously loved shoes donated and hope our next fundraiser of designer handbags will attract equal support.”

Paul Charalambous, Grand Pier General Manager, said: “This was a wonderful charitable event raising vital funds for Weston Hospicecare and we look forward to hosting the next auction.”

Anyone wishing to make a handbag donation can deliver to Escape Hair and Beauty, in Bleadon or Skidmore’s in Worle High Street.

Collections can also be arranged by calling David Plaister Ltd on 01934 815053 or email This email address is being protected from spambots. You need JavaScript enabled to view it. 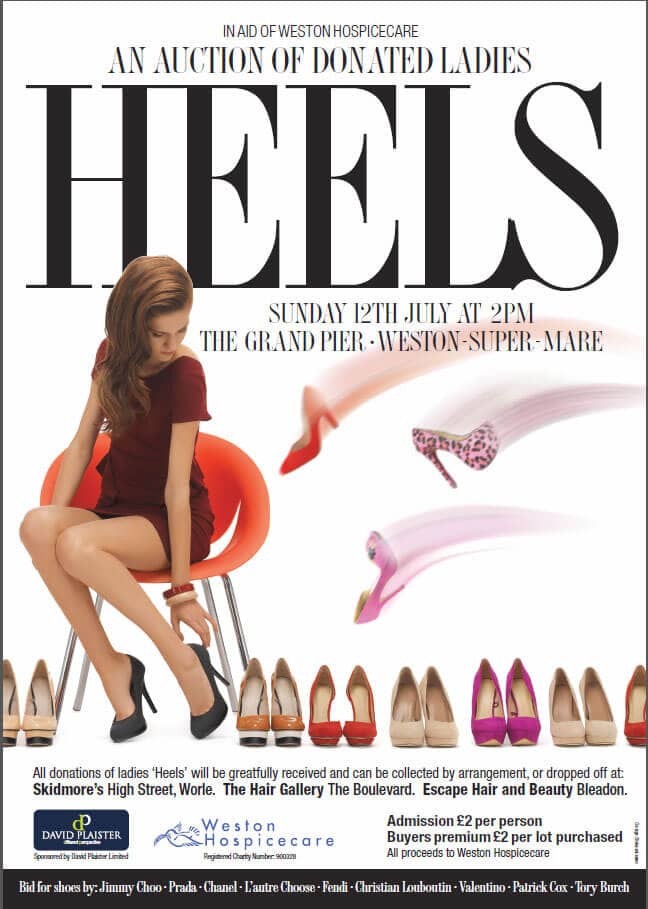